We just got home from having a traditional Sunday Roast Dinner at my mum-in-law's house.  It was delicious!  Maggie is a great cook and puts lots of love into her Sunday lunches.  Roast dinners are mini versions of Christmas dinner and take as much skill and almost as much effort to prepare as the full-size seasonal feast. 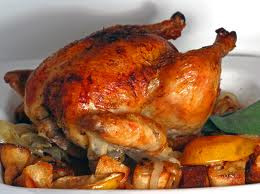 Every Sunday, the great British public dine on roast dinner prepared at home or in pubs and restaurants all over the country. These restaurant meals are called Carveries and reputations are made and lost on the quality of the roast dinners on offer.  Roast meat is so integral to British society, such an institution, that the French refer to the inhabitants of these islands as 'Les Rosbifs' - the roast beefs!

So, I wondered how this tradition started... cue Wikipedia :
There are (at least) two opinions on the origins of the Sunday Roast. One holds that, during the industrial revolution, Yorkshire families left a cut of meat in the oven before going to church on a Sunday morning, which was then ready to eat by the time they arrived home at lunchtime.[1] The second opinion holds that the Sunday Roast dates back to medieval times, when the village serfs served the squire for six days a week. Then on the Sunday, after the morning church service, serfs would assemble in a field and practice their battle techniques and were rewarded with a feast of oxen roasted on a spit.

Today's Sunday lunch was as traditional as you can make it.... up to the dessert course.  Our pudding, the British word for dessert, was New York Cheesecake!  Who knows, we may be on the verge of a new tradition.

Thank you, Maggie, for a delicious lunch!

Debs Dust Bunny
Welcome! I am Debs, a former 'Yank' now living in the UK, and the Dust Bunny is a very furry, black cat who decided to take up residence in our garden. As a result, he adopted us and we became a family of three. We live in Devon with my English husband, Andy. It is a dream come true for me because I have always been an Anglophile. I would love to show you some of the beautiful countryside, delicious local food, and historic sights which are my privilege to enjoy every day. Oh and for good measure, I'll sprinkle in some photos of the Dust Bunny!